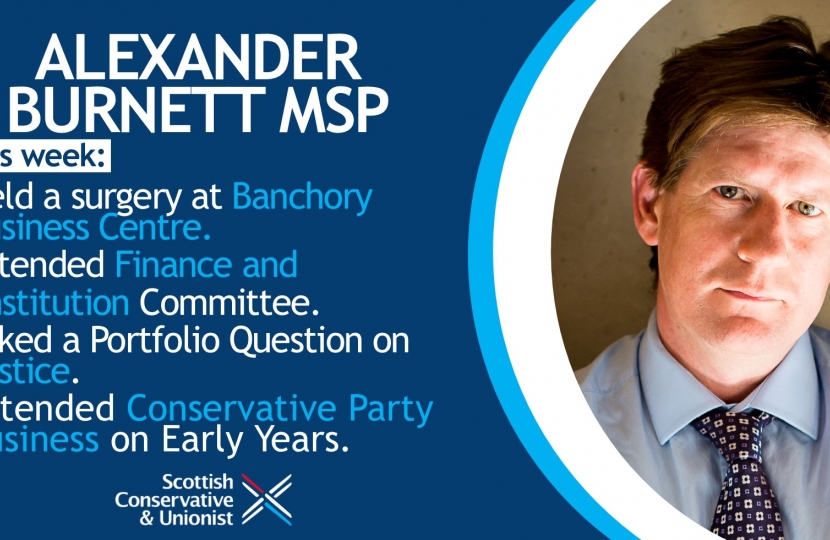 On Monday I held a surgery at the Banchory Business Centre, I appreciate my constituents coming out to see me.

On Tuesday morning I had an interview with a student from Saint Andrews for a research project. In the afternoon I attended the Ministerial Statement on the European Union Withdrawal Bill, the statement was an update on the bill for Parliament.

On Wednesday I attended the Finance and Constitution committee meeting, this session was to collect evidence on the Planning (Scotland) Bill.  I attended Portfolio questions in the chamber on Justice, I was able to ask a question about what the Scottish Parliament’s response is to the criminal justice social work statistics that were published on 6 February 2018. I attended another update on the European Union Withdrawal Bill. I later attended conservative party business debate in the chamber on Early Years and Childcare. Childcare is one of the most important topics for many governments, because children are the foundation for our future. High-quality early learning can play a key role in reducing the attainment gap by creating a level playing field.

On Thursday I attended the First Ministers Questions (FMQs) the main topics from the chamber were on the weather issues caused by the Beast from the East winter storm and on the First Minister’s plan to boost the Scottish economy with a new Scottish national investment bank. I also attended the Ministerial Statement on the European Union Withdrawal Bill on treating the bill as an Emergency bill.