Ron McKail was first elected in 2007 as one of 4 Councillors serving Westhill and District.

Ron has lived in Westhill for over 20 years.  Prior to his election as councillor for Westhill & District he was the Chairman of the Westhill Residents’ Association.  He is also Chairman of the Garioch and North Marr Community safety group and a committed campaigning for road safely, in particular for young drivers.

He is also a founding member and Treasurer of Westhill's Mens' Shed. 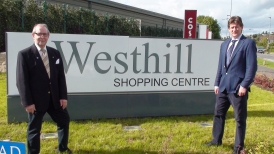