Burnett calls for action as farmers go to rally 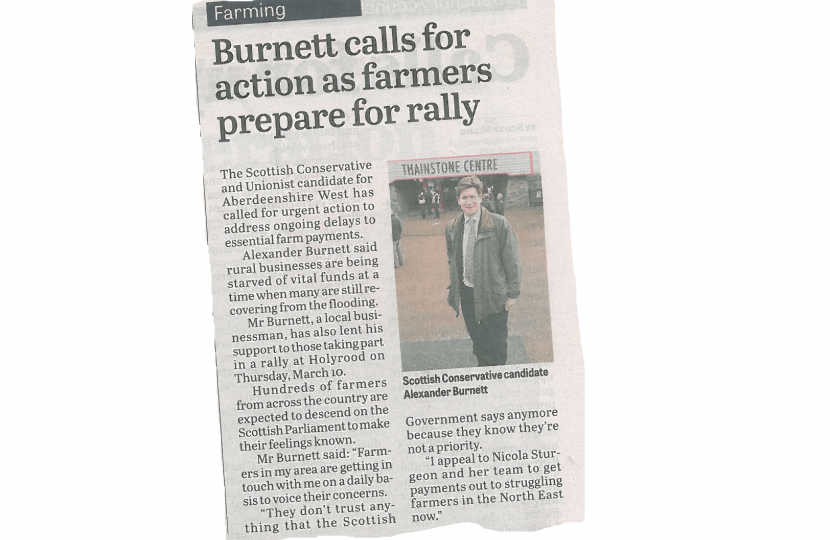 The Scottish Conservative and Unionist candidate for Aberdeenshire West has called for urgent action to address ongoing delays to essential farm payments.

Alexander Burnett said rural businesses are being starved of vital funds at a time when many are still recovering from the impact of recent severe flooding.

Mr Burnett, a local businessman, has also lent his support to those taking part in a rally at Holyrood on Thursday, March 10.

Hundreds of farmers from across the country are expected to descend on the Scottish Parliament to make their feelings known.

Problems with a Scottish Government IT system have already cost the taxpayer tens of millions of pounds in cost-overruns.

It has emerged that ministers were warned that there were problems with the system, but failed to act.

Independent public spending watchdog Audit Scotland also raised concerns two years ago and is due to report on the issue again in May.

Mr Burnett, Scottish Conservative candidate for Aberdeenshire West, said, “Farmers in my area are getting in touch with me on a daily basis to voice their concerns.

"They don’t trust anything that the Scottish Government says anymore about when their payments may arrive because they know they’re not a priority for the SNP.

"I am working with Ruth Davidson to encourage the SNP to make this issue a priority before they get caught up in the Holyrood election campaign.

"Many families and rural businesses who rely on these payments are facing a cash crisis. They cannot afford to wait until after the election.

“I appeal to Nicola Sturgeon and her team to get payments out to struggling farmers in the North East now - they have been through a tough winter and do not deserve to be treated so appallingly.

"Furthermore, an investigation should be launched into whether warnings about the IT system were ignored and why."

The CAP payment crisis started with a £200 million botched IT system which civil servants have been struggling to put right and the blunder has led to less than 50 per cent of farmers receiving payments that they usually receive in December.